Choosing the right time to start introducing solid food has been a dilemma for centuries. This decision can be even more difficult for babies who were born prematurely. 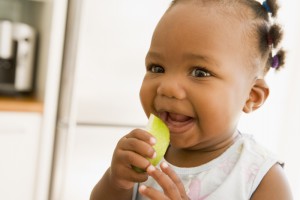 The Window of Opportunity

There is a reasonably small window of opportunity to start your baby on solids. Too soon (before 16 weeks postnatal age) and there is an increased risk of allergy and anaemia because the gut is not ready. Most babies do not yet have enough control over their tongues and mouth muscles. Instead of swallowing the food, they push their tongues against the spoon or the food. This tongue-pushing reflex helps babies when they are breastfeeding or drinking from a bottle. Most babies lose this reflex at about 4 months of age.

Too late (after 7- 10 months postnatal age) and your baby may have developed a resistance to having anything but milk in his or her mouth. There is also a risk of anaemia with starting solids late because a baby is born with only enough iron stores to last about 6 months and after that needs to get iron from food. If your baby was born prematurely, use the following points to help you decide if he or she is ready:

• Latest time – Before 7 months after birth

Introducing solids will be much easier if your baby:

• Can hold his or her head up well, sit up

• Appears to be able to eat from a spoon

• Doesn’t immediately push food out of his or her mouth although for some preterm babies this may not be a useful indicator especially if other cues indicate the baby is ready.

Other reliable cues are increasing demands for feeds and an appetite that is clearly not satisfied with milk alone.

At first you may want to pick a time when you do not have many distractions. However, keep in mind that as your child gets older he or she will want to eat with the rest of the family.

Why is iron important for premature babies?

Premature babies have lower iron stores at birth than term infants and therefore a higher risk of iron deficiency. Iron is needed to make red blood cells, which carry oxygen throughout the body.

It also plays an important role in immunity, brain development and growth. Babies who do not get enough iron will become tired, faint, pale, and uninterested in play. Low iron levels in the body may cause anaemia. To improve blood iron levels babies need a variety of iron containing foods everyday.

What are the best sources of iron?

• Red meats such as beef and lamb

• Offal meats such as liver and kidney (try pate on toast)

• Offer cold meats such as ham or chicken as a snack

As well as meat, try serving other foods, which contain iron:

Vitamin C helps iron to be absorbed by the body, so try to include a serve of vitamin C rich food such as fruits (especially citrus fruit, kiwifruit, strawberries, rockmelon and paw paw) and vegetables (especially tomato, broccoli and capsicum) with meals. For example serve:

• Vegetables or a salad with meals

• Add a dash of orange juice to baby’s pureed vegetables