This week we get some insight into weaning in INDONESIA, for this particular area I would like to include a summary of a study done recently.

The actual practices relating to child feeding and child care noted at the time of the study: 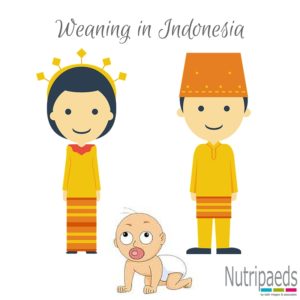 – Prelacteal feeding with sugar water, honey or teas, for one to three days is very common to mark the newborn’s freedom from the womb and to give the infant something until the breast milk flows.

– Generally, but not universally, the initial colostrum is discarded because it is thought to be dirty and there is a fear it will do harm. Prelacteal feeds replace the colostrum. Traditional midwives (dukun bayi) encourage this practice.

– By 48 hours after birth, almost all mothers have begun to breastfeed and continue to breastfeed confidently and properly during this first month.

– Breastfeeding is continued on demand, but generally is not done exclusively.

– Predominant use of the left breast begins, due in part to mothers breastfeeding more while working.

– By the third month, many infants, especially in semi urban areas, are receiving rice porridge in addition to tastes of other foods, pre-chewed and fermented rice is given.

Nutritional status documented by monthly weighing deteriorates further among this age group as dietary intake meets only half of the calorie and protein requirement and illness increases. (On any given day, approximately one-third of disease  children have some symptoms of an illness.)