As we continue our journey around the world we arrive in India. India is such a mixed country of culture, classes, casts and a mixture of extreme poverty and extreme wealth.

Infant feeding and weaning practices in India continue to demonstrate that a significant number of infants do not receive colostrum even though breastfeeding is universal and often continued for a longer period. There is however an improving trend for breastfeeding within the first hour of birth and exclusive breastfeeding for up to 5 months .

Unfortunately weaning foods and feeding/ cooking utensils are often contaminated with bacteria in the poorer areas. Thus resulting in frequent bouts of diarrhoea .

In the middle and upper class households babies are routinely weaned on to fruits like mango, apples and bananas . Then Indian babies get to experience the natural taste and flavours of vegetables. After which cereal grains are introduced into the babies diet. 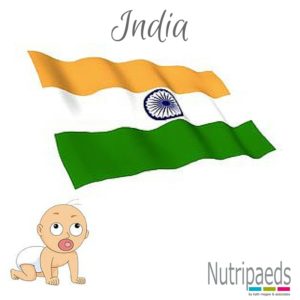 One famous Indian dish is:

Dalia is from broken wheat and can be made with or without vegetables. At times lentils are included and butter is added for taste.

This dish is made with rice and de-husked moong dal. To this ghee and mixed veggies are added.

In the past Dal water  (watery part of the prepared lentils ) has been used as a weaning food , however it is devoid of sustainable nutrition. This has since been discouraged nationwide across India as weaning babies onto dal water puts them at high risk of malnutrition .

So in a country that has many delicious weaning ideas it is simultaneously challenged with the need to educate the greater population with weaning and appropriate weaning foods.