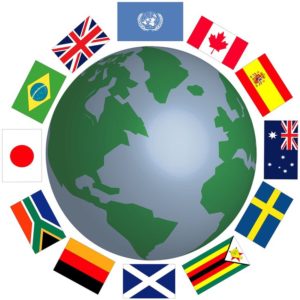 See what parents are serving up in high chairs across the globe.

The Japanese enjoy the world’s longest average life spans, and a big reason for that may be the food they eat starting from a very young age. Rice is the centerpiece of a common toddler meal. All other foods — fish, meat, vegetables — are side items intended to enhance the flavor of the rice. A typical toddler lunch is egg-flavored rice with broiled fish or seafood (more popular than meat due to the island’s access to water), a side dish of lightly cooked seasonal vegetables, and soup with tofu (commonly known as miso). Other Favorites: Noodles — soba (buckwheat) and udon (wheat flour) served in a soy-flavored fish broth with vegetables; tofu with veggies; Bento, a boxed meal of rice, pickled veggies; and other side dishes. Sweet Tooth Satisfiers: Kimi balls are egg-flavored, rice flour-based sugary treats that literally melt in your mouth.

Take a peek at any parent’s shopping list down under, and you are likely to spot Vegemite (similar to South Africa’s Marmite), a yeast extract-based sandwich and toast spread. Vegemite is unofficially referred to as one of Australia’s national foods (22 million jars of it are sold a year). Peanut butter, jam, butter, and cheese are often added to soften the strong taste for kids. Other Favorites: Ryvita (crispbread), Jalna (Australian-made yogurt), Cheesymite scrolls (baked Vegemite and cheese bread), spaghetti Bolognese, meat pies (pastry filled with beef), beets and beet sandwiches, Weetabix cereal. Sweet Tooth Satisfiers: Sultanas are a popular type of raisin, similar to America’s golden raisins but slightly sweeter; kids munch on them plain or use them to top cereal. Also, muesli bars (an oat and wheat bar with fruit flavoring) and various types of berries.

Fun Food Facts • After the United States, the largest market for McDonald’s is Japan, with more than 3,000 restaurants. FYI: Ronald is known as Donald there. McSushi, anyone? • Danes have a term called hygge, meaning good food. It represents the satisfaction and overall feeling of happiness one gets from a great meal.

Danish toddler foods are similar to what you might find served in the cafeteria in IKEA. Indeed, Danish nursery foods exhibit the same Scandinavian practicality as the popular furniture store: They get the job done. The easy-to-chew staples include frikadeller (meatballs) and chopped salads. Kids also clamor for sm?rrebr?d, an open-faced sandwich made with rye or pumpernickel bread and different fillings: liverwurst, ham, cod roe, frikadeller, mackerel, sweet red cabbage, marinated red beets, and Danish cheese, among other items. Sm?rrebr?d is eaten with a knife and fork rather than one’s hands. Other Favorites: Like its German neighbors, Denmark is big on meat and potatoes (for toddlers, especially potatoes). Traditionally, fresh fruits and vegetables were not abundant because the long, hard winters made farming difficult. Today, however, salads and greens are much more common. Apples, cherries, and solb?r (black currant or sun berries) are typically served in small portions with cheese, and also used to add spots of color to various desserts. Sweet Tooth Satisfiers: The pastry we in South Africa call a Danish is known as wienerbread a food introduced by immigrant bakers from Vienna in the 1840s.

The Swedes, oddly enough, are number one in the world’s consumption of tomato sauce (the United States and Canada tie for third, after Australia), and children are certainly a big reason the demand for tomato sauce is so high. What do kids put kyomsto sauce on? “Literally anything, but especially anything that looks suspiciously nutritious,” one Swedish parent says. A popular option is macaroni-and-substitute- the-cheese-with-tomato sauce-please. Other Favorites: Falukorv (Swedish sausage), meat stews, fried fish or fish fingers, mackerel, meatballs, porridge, pancakes, and bagels. Sweet Tooth Satisfiers: The Swedes love their ice cream — in fact, they rank in the top 10 countries in consumption of this summertime favorite. But they’re also careful not to let toddlers overdo it. Instead, fruit, fruit juices, and fruit sauce are typical substitutes, as well as sponge cake and rice pudding with fruit sauce.

Indian toddlers adore khichdi, a mushy rice-and-lentil-based dish (think a spicy, turmeric-yellow rice porridge), because it’s easy to swallow, while parents love that it includes just about every food group a growing child needs. Vegetables ranging from carrots and green beans one day to squash and okra the next and a protein (goat, lamb, or chicken) are cooked in butter and turmeric powder. Because the dish is traditionally eaten by hand, the veggies need to be soft enough to smash with the rice and then scooped up straight into the child’s mouth. A twist of lime and a dab of pickled mango are often added to enhance the flavor. Other Favorites: Aloo gobi (potato and cauliflower curry), parota, nan or chapati (variations of flat bread) eaten with subzi (onion-sauteed vegetables, such as diced potato with fenugreek, bitter gourd, or cabbage). In South India, rice and yogurt are toddler staples. Sweet Tooth Satisfiers: Gulab jamun, fried milky dough balls covered in syrup; lassi, a yogurt drink commonly sweetened with mango; kheer, a rice pudding flavored with cardamom.

Fun Food Facts In India, kids and adults alike eat with their hands. This practice encourages mixing different types of meat, fish, and veggie curries with rice or bread (many Indians will swear this is the only way to truly enjoy a meal).

Israeli toddlers are typically served one of three kinds of sandwiches for lunch: olive and butter (pitted olives between two slices of buttered bread), salted cottage cheese, and chocolate spread (a popular Israeli brand is Hashahar Ha’ole, “Rising Dawn,” which looks and tastes like Nutella). The sandwiches (usually on white bread) are served with yogurt, a piece of fruit, and orange juice, apricot juice, or chocolate milk. Other Favorites: Israeli salad made from diced cucumbers, carrots, celery, onion, peppers, olives, and parsley, tossed with olive oil and lemon juice. (No leafy greens found in this salad!) Sweet Tooth Satisfiers: The ever popular ice cream, chocolates, and Bamba, a puffy peanut butter snack.

A tropical climate and an abundance of fresh fruit contribute to healthy meals for toddlers in Brazil, where “frying is a no-no,” according to one parent. Instead, most dishes are stewed. A typical meal is rice and beans with some protein (ground beef, chicken, fish, or pork), and a vegetable (potato, broccoli, spinach, peas, or carrots). Other Favorites: Beans (feij?o) of many types and colors (black, red, white), Coxinha (chicken croquette), p?o de queijo (cheese bread), pasta with tomato sauce, and cheese and crackers. Sweet Tooth Satisfiers: Tropical fruits (papaya, mango, guava, kiwi, fig, passion fruit, and a half-dozen varieties of banana) and juices made from “real fruits, not bottles or concentrates,” according to one Brazilian. Indeed, roadside juice bars are a common scene throughout the country. More traditional desserts include ice cream and gel?ia de mocot? (a calcium-rich pudding).

Turkish toddlers receive a tremendous amount of nutrients in a popular lunchtime dish called sebze yemeg (vegetable casserole) or t?rl? (translated: “a variety”). The vegetables are usually whatever is in season: Celery, peas, green beans, spinach, artichokes, and zucchini are popular options. Additions may include white or brown rice, bulgur (cracked wheat), red lentils, minced chicken, lamb, or beef. The lunch is rounded off with a salad (of tomatoes, cucumbers, and peppers) and rice (if it’s not already included in the stew). Yogurt accompanies most dishes. Other Favorites: Bread (French or baguettes) with every meal, mini shish kebabs, grape leaves, kashar cheese (similar to sharp Cheddar), pureed spinach. Sweet Tooth Satisfiers: Homemade cakes and puddings; Turkish Delight, a confection flavored with rosewater, similar in consistency to a gummy bear, covered with powdered sugar.

In the C.S. Lewis novel The Lion, the Witch, and the Wardrobe, Turkish Delight was the entrancing sweet that led Edmund to betray his siblings. He’s not alone in his passion: Napoleon, Churchill, and Picasso also fancied the sugary confection.

Korean food, in general, is defined by bold and spicy flavors. One way toddlers learn to handle the heat, is by eating lots and lots of kimchi, a pickled vegetable dish containing generous amounts of chili powder. Chinese cabbage, radish, garlic, onions, and sometimes seafood are other popular ingredients in this quintessential Korean dish. Another staple, kim bab, consists of rice and small portions of vegetables wrapped in nori (seaweed sheets). It’s similar to the Japanese maki roll, but with the exception of the distinct smell of sesame oil, and these popular fillers: spinach, eggs, cucumber, and kimchi. Other Favorites: Bibimbab is white rice topped with beef, vegetables, and a fried egg — and lots of chili pepper sauce. Nongshim is a brand of spicy Korean ramen noodles, usually cooked with eggs and onions. Sweet Tooth Satisfiers: “There is more junk food in Korea than in America,” laments one parent. Koreans eat a wide variety of candy and ice cream. Melon bars made from honeydew, and Popsicles are also popular.